Yves is an individual that never had to work much for anything. Naturally intelligent, rich, and from the right family. Most things were simply handed to him.

As a result, Yves is quite sarcastic. Believing that he knows better than most people he can sometimes clash with others. Ultimately he’ll be a team player when it suits him though. He’s smart enough to not be swindled but sheltered enough that he tries to see the good in everyone.

All and all, pretty nice so long as you can put up with his antics.

Yves has an average build and stands about 6 feet tall. His skin color is pale and his complexion is clear. He’s relatively average looking, leaning more towards ‘attractive’ than unattractive though. Yves’ hair is a light brown typically brushed to one side and he has light blue eyes.

Generally he wears a red sweater over his light bullet proof vest and he can be a bit self conscious about his flabby stomach compared to the strength and tone of his prosthetic arms. He’s not overweight by any means but it still weirds him out. He’s generally sporting some black or gray slacks along with a fancy pair of white boots with gold trim. 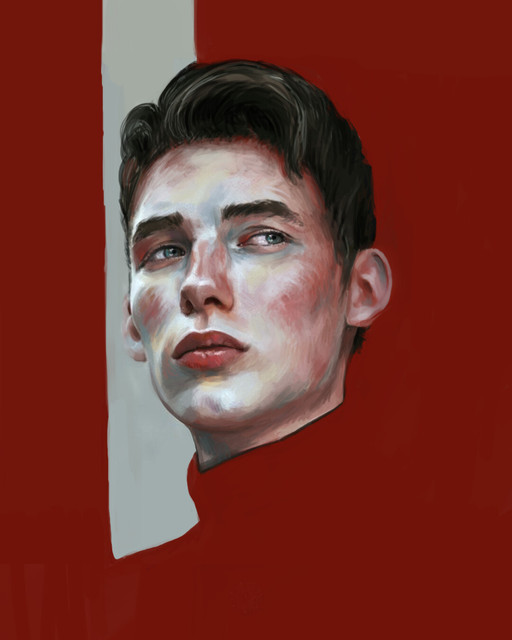 I know you haven’t told your wife yet and we all recognize how difficult this is. But every single one of us put our names in and yours got pulled. We can’t just expect the populace to grin and bear their loved ones being sent off into the black while no one of importance from Genesis is on board.

We all feel bad that you and Abelle only have the one son but all of us knew this could happen. The departure isn’t far away, when are you going to make the arrangements?

Let’s face the facts. Our vendors aren’t happy and the market is still sour from the Genesis Protocol announcement. We need this Jacques. The child of an executive volunteered to bravely assist with the expedition. It’s perfect!

You’ll be placed on the board in a few years for sure and the next ship we send is certain to appoint your son to a prominent position once he’s earned his due establishing the first extracelestial colony. They’ll be talking about the Cochet name centuries from now!

The company needs this after our Q4 results.

I don’t give a damn about the board. You’re talking about my legacy, my son. We’ve all read the preliminary estimates, we’ve seen the reports from █ █ █ and I’m not exactly thrilled with the prospect of my son being some manual laborer doomed to die off at the age of 30 on some shithole.

I told Arturo this idea was idiotic but he blabbed to the chairman anyway. Convenient that he doesn’t have any children.

You want an executive’s kid you can praise as a hero to the holotapes? Send one of Violette’s little brats or Hans’ druggie step-daughter. Yves isn’t setting foot on that fucking ship.

It was a pleasure having you and Abelle over for dinner last night. I knew that after a good meal and a bit of wine we’d come to an understanding.

As per our discussion, we’ll bring Yves in next week and debrief him on this great opportunity. Freeze him right after, it’ll be for the best. You shouldn’t worry, we assigned him to an analyst role, quite safe all things considered. Feel free to prep him as much, or as little, as you deem fit.

Once the vessel departs we’ll get the announcement published that he volunteered to work as Deputy Chief of Security. “Genesis only sends its best to defend the lives of your loved ones,” should be a nice tag line. The day after launch we’ll need you and Abelle in studio Zeta-6B for your interviews.

Finally, as agreed, I’ve cc’d in our best genesplicer Martin. He’ll work with you and Abelle to get you a new son. Just send your specifications and requests in and after we conduct the interviews he can get a DNA sample from you both. I trust this arrangement should put an end to your grievances and we can all put this behind us.

I shouldn’t need to remind you but this is a courtesy. Step out of line again and we won’t just seize your assets. We’ll relocate you and Abelle to the surface. I mean it.

The night before his life was forever altered Yves’ father took him aside. Told him everything. The raffle among the Genesis executives, the strong arming from Sokolov, and how he should imagine the expedition as a new beginning. An exciting journey into the unknown to achieve something no human ever had before.

But Yves remained unconvinced. He spent the rest of the evening ingesting as much bourbon as possible. Between the tears, hugs from mother, and drunken vomiting his mind kept going back to a singular question. Why me?

His upbringing had been that of lavish privilege. He learned dueling techniques at a young age and took an interest in business, like his father, and programming, like his mother. His family had his arms augmented with prosthetis. But he had no skills pertinent to survival or leadership or anything resembling the establishment of a colony on some new mysterious planet.

He didn’t remember much of his de-briefing. Still drunk and disheveled from the night before. He was going to miss his parents. His friends. His cat. As he was loaded into pod AE640829 he quickly tried to think on some of the positives. But drew a blank.

The cryopod hissed as the subzero chemicals met the warm atmosphere of New Terra. Slowly the pod door creaked open and upward while two eyes lazily blinked into consciousness. Almost immediately he realized something was wrong. Amidst the rubble and the silence of the STS Genesis-02 he concluded that this voyage was going a tad worse than he had imagined.
Top
Post Reply
1 post • Page 1 of 1

Users browsing this forum: No registered users and 5 guests