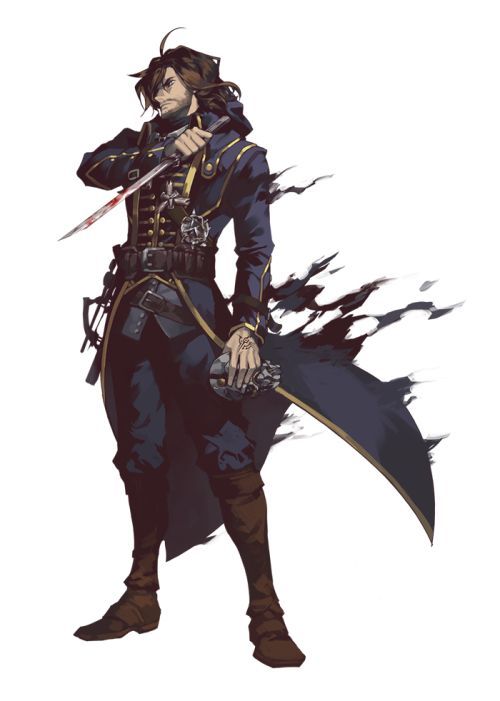 Guard Notes - Can handle himself ;
Has no will to escape
Phantom “ability”
Do not take his equipment

-- Drāke is a 6’3 ( 190.53 ) male with an athletic build. He has slick dark brown hair that . He is Caucasian but with a slight tan on his right hand. He does have a prosthetic arm in place of his left one.

-- He is often found in a blue Nexcrö Uniform. The uniform is a protective slick armour. It is ordained with many different symbols and buttons. It has 3 fitting belts so the uniform is well secured. It has knee high brown boots that are surprisingly firm but flexible and comforting. The uniform has a lower capped jacket that has a shoulder strap and a golden trim.

-- When running or going Phantom he will stream colours, usually consisting of blue, faint gold, and hints of black. But when he goes Phantom he is nearly see through other that the perplexing of the area around him and the colouration given off when he moves. And as he comes out of the ability there is a blast of the colours around him in every direction. This is due to his gadget and how it processes.

-- Drāke is a very antisocial person, he is used to working alone and not very well with talking, his usual thing is shoot first ask questions later. He is very black and white, if something is happening there is always a reason. He is very keen on working alone, but he makes an exception if given the right case.

-- He knows Old Swedish but speaks English for the most part, the only time he speaks Old Swedish is when he is raging and when speaking so no one understands. Though he knows both fluently he would rather speak Old Swedish than English he still does anyway.

-- Though he never keeps to it he still remembers it, his mentor always used to say, “ Vänster är de döda, lägg nu de som vilar innan vi själva ska sova. Döda bara för nåd aldrig för vinst. ” Left are those of the dead, lay now those to rest before we ourselves are to sleep. Kill only for mercy never for gain.

-- Stealth ( 200 ) [ Rank 2 ] - Though Drāke can’t just disappear into thin air he can very well blend in, due to the camo he has it allows him to become basically unnoticeable, as he can quiet his footsteps to nearly nothing. The stealth also allows him to hide in a crowd quickly and easily.

--Martial arts ( 200 ) [ Rank 2 ] - Drāke thanks to his mentor was taught martial arts from the get go, he knew how to fight but he is an expert now. His martial arts are taught to the extent of moves and style. He isn’t able to break the world with it, just able to fight better.

-- Mechanics ( 200 ) [ Rank 2 ] - He knows mechanics by heart give him the right materials and he can figure it out. Though he isn't a god at it, he takes a bit to figure something out and he could get lost on what he is doing sometimes. But he knows how to do engineering with it.

-- Strength ( 100 ) [ Rank 1 ] - Drāke can hit a lot harder than the average person do to his mentor training him and have been in fights since he was young. He is able to dent a car if he truly wants but he can’t break a wall.

-- First Aid ( 100 ) [ Rank 1 ] - Drāke was mandatorily taught first-aid, he was given certification for CPR and knows how to administer aid-care.

-- Assault rifle skill ( 100 ) [ Rank 1 ] - He can fire assault rifles well and can aim well. He can process quick and knows to fire slightly ahead when moving. Drāke can aim down an iron sight and have the same precision as a 2x scope, same with other scopes.

-- Handgun Skill ( 100 ) [ rank 1 ] - He can fire handguns well and can aim well. He can process quick and knows to fire slightly ahead when moving. Drāke can aim down an iron sight and have the same precision as a 2x scope, same with other scopes.

-- Land Vehicle ( 200 ) [ Rank 1 ] - He is very skilled with land vehicles so he can drive very well and can hot wire one. He can judge things a few secs before it happens so he can drive even easier. He’s also able to drive and fire a weapon by multitasking and his skill of driving.

-- Laser Handgun ( 200 ) - A model MexL 50. It is a small conventional laser pistol. It is a blue/black with a gold trim. It holds up to 50 shots before it needs a quick recharge/reload. The shots are about as harmful as normal bullets except the fact that if shot correctly could actually seal wounds due to laser physics.

-- Laser Rifle ( 400 ) - A model X5-R6 300. It is an Assault Rifle with SMG capability. The rifle can fire 100 rounds every 5 seconds, and 300 in 15. But when fired this fast the gun overheats quite quickly, and can put back out its heat perhaps burning its user. The rifle is a black with a golden trim. The rifle has a scope that zooms up to 8x but that is it, it also has a secondary grip for better precision.

-- Motorbike ( 200 ) - This bike is an electric non-compactable motorbike that can reach up to 125 mph. The bike is a slick black Jäguar XC Limited Sport. The bike is 5 feet long and 19 inches wide. It sands at just 27 inches when standing straight up. The Motorbike can go 120 miles without needing a recharge, but goes to sleep at 115 miles, and gets slower at 100 miles ( All in regular mode ). The bike also has 3 modes, Dirt, Sport, Regular. In Dirt mode is can better go off-road and can climb better though is can only do so much and it maxes out at 100 mph. In sport mode can reach speeds of 150 mph but is less manoeuvrability and takes up a lot more energy. And in regular mode it can better manoeuvre and better mileage, but it is slower than sport mode. The bike also has a side hold for both of his weapons.

-- Prosthetic Arm ( 150 ) - His left arm is prosthetic. It is a built arm with much circuitry and neuro-anatomic-engineering so he can just think to move it. The arm can move to the extent of a normal arm except for the fact that it has tools built into it. The tools include; Screw-drive ( of three sizes ), Lock-pick, and a laser stun-gun that is very weak. The arm is a black with small gold trim and the hand is made to look like skin, with some openings. It can also camo along with him.

-- Chameleon Camo ( 650 ) - He can conceal himself to his surroundings, much like a chameleon. Though the camo only puts him to be invisible to those that look directly at him, the area around him is somewhat distorted, like if you were looking through water, it’s barely noticeable but still can be seen if you look close enough. The camo is pushed out of a device on his back that covers him in tiny hexagon plates ( kinda like star-lord's mask ). The device is very durable and has up to 3 charges each day. The device though gives out bursts of colour when he uses it and when he moves, its a side effect.

-- Flask, Lighter, and cigarettes ( 0 ) - These items are basically just extra, ( They have no real benefit nor make have any drawbacks ). The flask is a silver case that holds up to 12 oz. of any non-corrosive liquid, i.e. you can’t put acid in the thing. The lighter is a used one it has about 2 oz. of gas left within the lighter itself. The cigarette pack has 18 left of it’s 20 pack.

Born in Fëobūrn, Swëdæn Drāke was in an orphanage from as early as he can remember. He was groomed into the Nexcrök Force of Swëdæn by his mentor later in his childhood. Though born 2 years after the Unity of Scandinavia, when Norway, Denmark, Sweden, and Finland united in response to the British overtake of France and northern Spain, and Germany’s new rule of Italy and Switzerland. The Unity was reluctant from Finland but they agreed. The Force was born as a new type of imperial army. And is centralised in Old-Sweden. And is spread across Swëdæn. Offering places to stay and national secure in the newest way. Now allowing for the prosecution and justice to happen faster and better. The Nexcrök Force is under the jurisdiction of the Scandinavian Parliament.

When Drāke was a child he was running errands for the underground crooks of Swëdæn. Though born in Fëobūrn he was still open to the web of crime below. But when he was caught by his “mentor”, Jöhn Gœnfrân. Jöhn was an old gentleman whom captured Drāke, but he didn’t immediately take him in. Jöhn decide that instead he take the child in, and so he did. Jöhn brought up Drāke as his own, not dismissing him, no matter how many fights Drāke had with him. He was always honest with Drāke and never once lost his temper with him. That was until one day he was struck down.

The day Jöhn was struck down Drāke went into a fury, he used everything his mentor had taught him and came out with a blast. Even the men who stuck down Drāke father figure ran in fear from him. He killed them faster than they could see, and he didn’t do it painlessly.

Since then Drāke joined the Nexcrök Force and raised through the ranks till he because a sergeant in the field. One day he was alone with his commander. That day Drāke put a gun to his higher-ups's head and said, “I’m sorry, but sometimes you have to live and let die. For we all die someday, it is a mercy to die painlessly, a curse to die slowly, but a disheartening dishonour do die at the band of a comrade. I’m sorry for this but, if I wish to live on, I must commit this mutiny.”

When he fired the round, it entered his bosses skull, and into his brain. His commander fell to the ground, Drāke still holding the gun at the point which he shot. The gun had rang throughout the building, alarms rang and people rush him. Giving no effort to resist he was taken to prison, but he released on patrol, thanks to him not resisting, being a sergeant, not having silence or anything and having a guilty plea.

One day he was released, but he had a permanent mark. So he turned to bounty killing. He became a mercenary and a private investigator for the syndicates and high payers. Later on he heard of the new world and that many were going to colonise it. He took the chance and went onto the ship to go.

Users browsing this forum: No registered users and 3 guests